Thanksgiving Poems For the Family 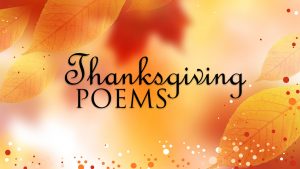 Each year Thanksgiving seems to be overshadowed by the winter holidays. Once Halloween ends Mariah Carey and Michael Bublé take over the radio waves with their songs about Santa Clause and Jack Frost. Well we believe that Thanksgiving deserves its time in the lime-light. We believe that November belongs to turkeys, pilgrims, and giving thanks. So, in tribute to Thanksgiving, Waterworks Aquatics has compiled a collection of our favorite Thanksgiving poems, courtesy of “Coolest Thanksgiving Poems,” for you and your families to enjoy this Thanksgiving!

The first poem is the traditional historical recognition of the coming together of the Native Americans and the Pilgrims.

If I had been a Pilgrim child

Among the fields and forests wild

Where deer and turkey used to roam,

A cabin would have been my home

With fireplace and earthen floor

And bearskins hanging at the door.

I would have gathered berries bright

And dug for clams and picked the corn

And laid the table smooth and worn.

Or hunted nuts hard-shelled and good

And helped in any way I could,

With time to laugh and play and run

When Indian children came for fun.

And on the first Thanksgiving Day

I would have met with friends to pray

And thank the Lord for all his care

In keeping us together there.

The poem about how delicious turkeys are.

The first one said, "It's getting late."

The second one said, "Who goes there"?

The third one said, "There are farmers everywhere."

The fifth one said, "It's just Thanksgiving fun."

Then Gobble Gobble went the wind.

And out went the lights.

And the five fat turkeys were out of sight.

And we cannot forget the poem about the great Thanksgiving food!

I ate too much pudding and pie.

I'm stuffed up with muffins and too much stuffin'

But I wish I had known when to stop,

For I'm so crammed with yams, sauces, gravies, and jams

That my buttons are starting to pop!

My stomach is swollen and sore,