There are many ways to propel oneself through water. Read on to learn more about the most common swimming strokes.

Front crawl: starting face-down, swimmers alternate their arms as they reach forward in the water. Between strokes, the head turns to either side to inhale, and exhales as it turns back into the water. Since breathing can slow swimmers down, good breathing technique is key in competition.

Freestyle: in competitive swimming, the freestyle competition is technically a free-for-all; racers can swim whatever stroke they want. But most choose the front crawl, which has caused the two terms to become generally synonymous.

Backstroke: as swimmers lay on their backs, the arms alternate in a rotating motion, rising out of the water, over the head, and back down again.

Flutter kick: keeping the legs relatively straight with a slight bend at the knee, swimmers alternate their feet up and down. The flutter kick is used in the front crawl as well as the backstroke.

Breaststroke: this stroke begins with the head above water. The arms extend forward and dig into the water, propelling swimmers’ heads below the surface. As the arms scoop around the sides and come back to the swimmers’ chests, their heads will pop back up out of the water. Unlike the front crawl, the breaststroke employs the whip kick, in which the legs kick out in a circular motion similar to frogs.

Butterfly: starting face-down with their arms at their sides, swimmers bring their arms together up out of the water and above their heads. In this stroke, the legs must stay together at all times, kicking as if they were a dolphin’s flukes fanning a hot fish. During competition, accidentally breaking into a flutter or whip kick results in disqualification. 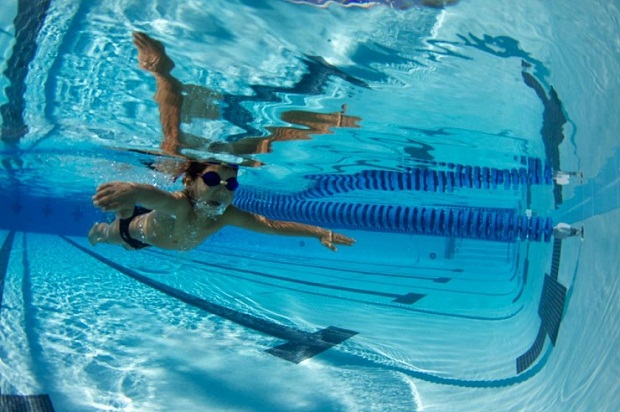