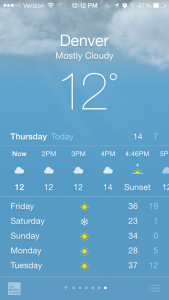 The Denver weather record books are being rewritten this week.

Readings at Denver International Airport overnight have far surpassed previous cold-weather marks. Just before midnight, the mercury dipped to -12 degrees, setting a new record for the coldest Nov. 12 on record in Denver, eclipsing the previous mark of -4 set in 1882. Denver weather forecasters with the National Weather Service predict the temperature will climb to 17 degrees in Denver for a high on Thursday. That would be warmer than the record low high for Nov. 13 of 12 degrees set in 1959.

"There is no possible way it can get any colder!!"

Although many of you may be used to the cold weather by now, Waterworks Aquatics thought it was a perfect time to reflect on some of the coldest temperatures ever recorded. When you see just how cold the Earth can get, the -4 degree weather will not seem so cold.

Ice scientist Ted Scambos at the National Snow and Ice Data Centre announced the cold facts at the American Geophysical Union scientific meeting in San Francisco on Monday. "It's more like you'd see on Mars on a nice summer day in the poles," said Scambos. "I'm confident that these pockets are the coldest places on Earth."

However, it won't be in the Guinness Book of World Records because these were satellite measured, not from thermometers, Scambos said.

"Thank God, I don't know how exactly it feels," he said. But he said scientists do routinely make naked -73C (-100F) dashes outside in the south pole as a stunt, so people can survive that temperature for about three minutes.

Most of the time researchers need to breathe through a snorkel that brings air into the coat through a sleeve and warms it up "so you don't inhale by accident" the cold air, Scambos said.

You probably don't feel so cold anymore do ya?