Hope everyone has had the most fantastic Labor Day ever! Waterworks Aquatics sure did. The company decided to have an unofficial Santa Cruz team building excursion with some of the willing members of our Aquatics staff. Everyone met early Monday morning in the parking lot of our San Jose facility. Carpools were determined and the staff members headed off on their journey to become better acquainted. The object of the team building exercise was to create stronger bonds of friendship among the staff members, as well as participate in a water sport.

Â Â Â Â Â Â Â Â Â Â Â Â Â Â Â  The early birds spent the morning and early afternoon having fun, bonding, but most importantly being safe in the water. Swimming in currents and waves is much more difficult than swimming in a pool. The conditions of the current and waves can change quickly unlike in a pool where there is consistency. As a result of this, swimming in the ocean can cause fatigue quickly. As a result of the extensive on the job training, each aquatics member receives, everyone was able to have a good time without the fear of water. Waterworks has made all of us much stronger swimmers, and because of this we were able to swim safely in the water. We really do train our team to be the best and it really shows in and out of the water. 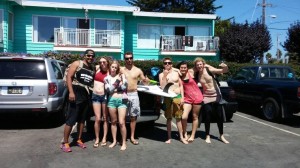