At Waterworks our professional swim instructors excel in their swimming abilities, patience and communication and have a vast experience working with children. Our swim instructors in Highlands Ranch are admired and well liked by both parents and their students.

Each instructor goes through an intensive training program to ensure that each swim student receives the best hands-on instruction available. Our swim instructors provide a nurturing experience for children while helping them develop and learn valuable swimming skills for years to come. And, for those adults that would like to learn or perfect their swimming abilities, we also provide adult swim lessons.

Each of our Highlands Ranch swim instructors offer a quality swim lesson experience for students of all ages and skill levels.To schedule a lesson with one of our skilled instructors or for more questions, contact us today! 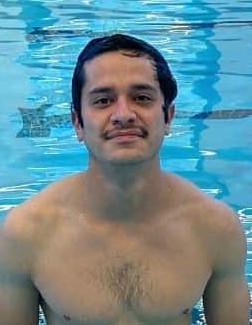 Alan has been swimming competitively since the age of four, and previously played water polo for two years. He swam for Lakewood High School, was voted Team Captain his senior year, and qualified for state finals in the 100m butterfly and the freestyle relay. His best events were the 200m IM, 100m butterfly, 100m freestyle, 100m backstroke, and the relay races. He went on to swim for one year at the University of Colorado at Boulder.

Alan is currently studying Integrative Biology with a Minor in Writing and Philosophy at the University of Colorado at Denver. Alan loves cartoons, Pixar films, and dancing. An interesting fact about Alan is he finished in second place for the National Lifesaver Award through the Red Cross. 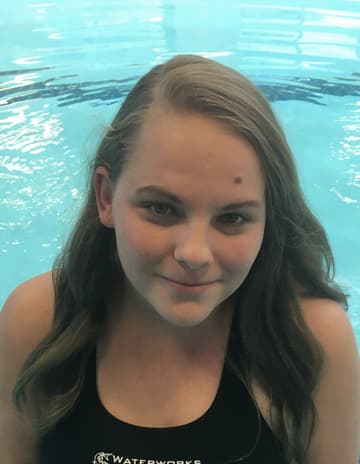 Brianna has been swimming since she learned at 18 months old and her favorite stroke to swim and teach her students is the freestyle. She has worked as a lifeguard for several local swim centers for over 4 years. She has experience working with kids as a nature instructor for 3 years where she would teach kids of all ages about nature.

She goes to school at MSU Denver where she is studying exercise science. In her free time, she enjoys playing volleyball and reading. Her favorite movie is Lilo and Stitch and her favorite book is The Land of Stories. She has a passion for ensuring the safety of all her students both in around the water. 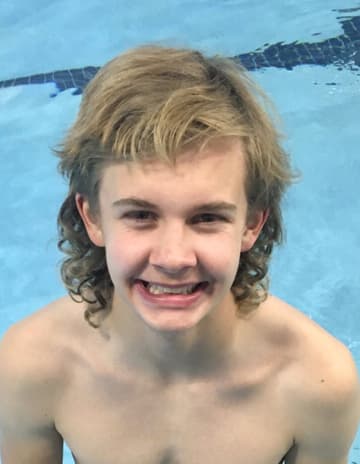 Dalton began taking swimming lessons at the age of four and has been swimming competitively for ten years. He currently attends Arapahoe High School where he is part of the Varsity swim team. His favorite stroke is Breaststroke and his favorite event is the 100 Breaststroke. As a Jr Coach for a summer swim team, he has had the chance to work with children ranging from seven to twelve years old.

His favorite part about teaching swimming lessons is being able to help his students grow as swimmers and making sure they are water safe. In his free time he enjoys driving and hanging out with friends. 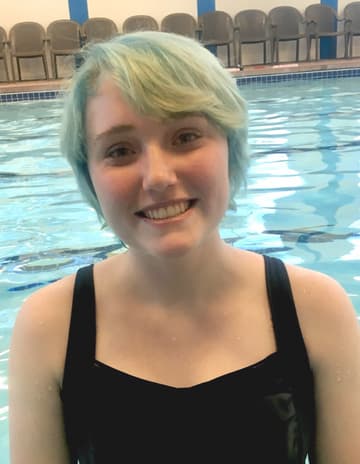 Georgia has been swimming since she was 2 years old and her favorite stroke to swim and teach her students is the freestyle. She has experience working with kids of all ages as a babysitter and a nanny.

In her free time, she enjoys running and learning about graphic design. Her favorite movie is The Lion King and her favorite song is "I Just Can't Wait to Be King". She has a passion for working with kids and being patient and welcoming to all students. She is excited to help her students become safer in the water. 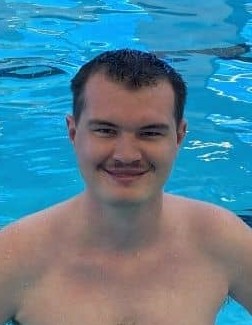 Jack has been swimming competitively since he was 6 years old. He swam for HRCA then for his high school’s swim team for 2 years. He has experience working as a lifeguard and a martial arts teacher, he is a second degree black belt.

In his free time, he enjoys cooking, practicing digital art and going fishing. He has a passion for working with kids and is excited to show his students how fun competitive swimming can be.

Justin began swimming at the age of nine and has loved swimming ever since. He swam with the USA Swim Team for about eight years and switched over to the Greenwood Tiger Sharks to swim with them for two more years. During this time he was swimming competitively for his high school swim team and qualified for state all four years.

Justin made it in the top ten in Colorado three out of four years he was in high school and top five his last two years. During his Senior year he qualified for Nationals and after high school he swam for one year over at the University of South Dakota where he almost qualified for the Olympics. Some of Justin's favorite events include 100, 200, 500, and 1500 Freestyle.

Justin has worked with children of all ages and gained most of his experience working as a swim instructor for three years and as a lifeguard for eight years. His favorite part about teaching his students is being able to witness how excited the children get each time they learn something new. Some of Justin’s hobbies include hiking, dirt bike riding, hikes and most of all spending time with his own kids and his dogs. 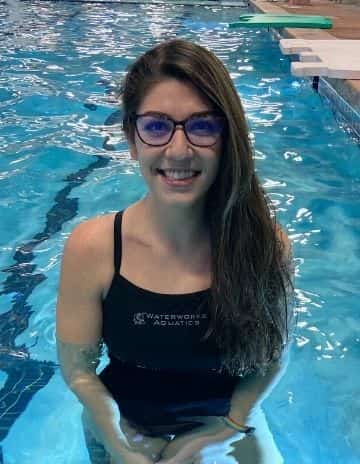 Kim swam competitively throughout middle school and high school. She started lifeguarding when she was 15 years old and has over 8 years of experience teaching swim lessons. She has taught kids of all ages, adults and children with special needs. She has a passion for ensuring the safety of kids in and out of the water.

In her free time, she enjoys painting, singing and spending time with animals. She loves Spiderman movies and her favorite books to read are the Percy Jackson series. 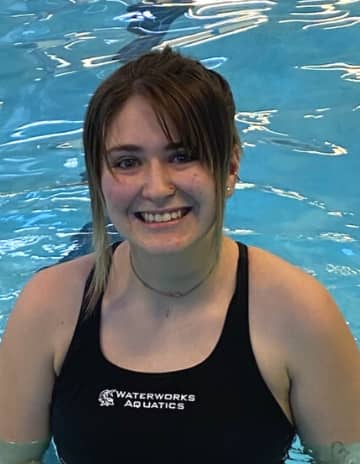 Madison has been swimming for as long as she can remember and swam for a local swim team for 3 years. She previously worked here at Waterworks for 3 and a half years and worked with kids and adults of all ages. Additionally, she has worked as a nanny and a babysitter for over 10 years!

She has a passion for helping others and loves working with kids. In her free time, she enjoys going to the pool and skateboarding. She is excited to help her students gain confidence. 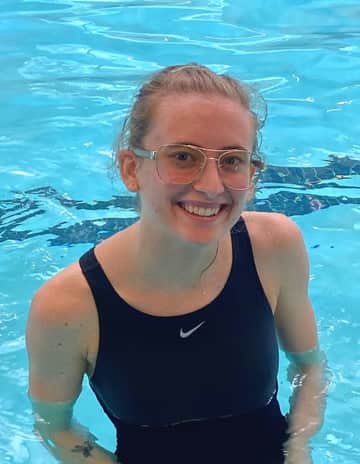 Mae began swimming for a local summer swim team when she was in middle school and continued through high school. She swam for her high school's varsity swim team and her favorite event to compete in is the 100 breaststroke. Sh has experience working with kids as a babysitter and a peer teacher.

She goes to school at Arapahoe Community College where she is studying criminal justice and art. In her free time, she enjoys learning more about art. Her favorite movie is Chicken Little and her favorite food is spaghetti. She is excited to help her students achieve their swim goals. 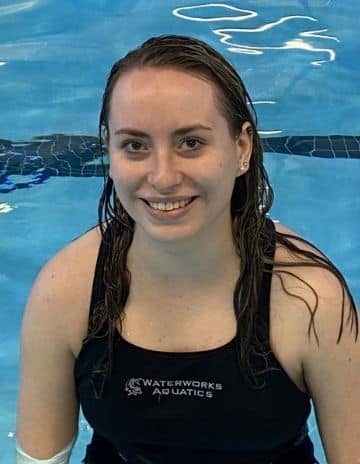 Melony has been swimming since she can remember and started swimming competitively in middle school. In high school, she swam for multiple teams and found that her favorite stroke is freestyle. She volunteered for Warren Village where she would care for children ages 3 months – 3 years old.

In her free time, she enjoys painting, baking and watching Disney movies. She has a passion for animals and her favorites are cheetahs. She is excited to teach and perfect her students strokes. 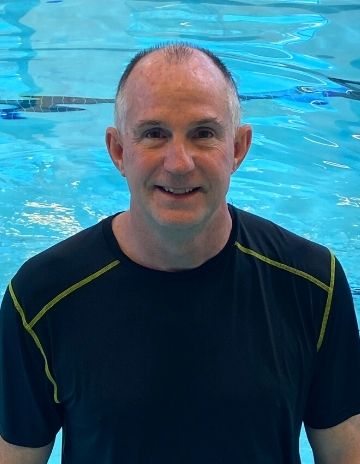 Michael has been swimming since he was a young child and enjoys playing all types of water sports. His favorite stroke to swim is breaststroke and he has earned a lifeguard certification. He has experience working at a daycare and teaching students how to wakeboard.

In his free time, he enjoys photography, wood-working and being out in nature. He has a dog named Chance who he likes to take on walks. He is excited to help his students become safer around the water. 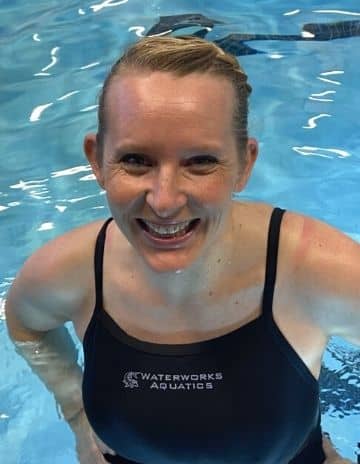 Michelle began swimming on her local swim team at the age of seven and continued to swim throughout high school. Her favorite event is the 100 IM and she enjoys swimming Butterfly in relays.

Michelle gained experience working with children ages six months to eight years old as a nanny. She also worked at a camp for children in kindergarten through 8th grade, lifeguarded for 3 years, and taught Sunday School for 2nd and 3rd graders. Lastly, she helped with reading programs for children in kindergarten through 2nd grade and created games and activities for afterschool programs.

Michelle is currently studying Digital Media at Dordt College. An interesting fact about her is she once kissed a giraffe! When Michelle is not in the water she enjoys photography, skiing, biking, camping, reading, rock climbing, and boogie boarding. 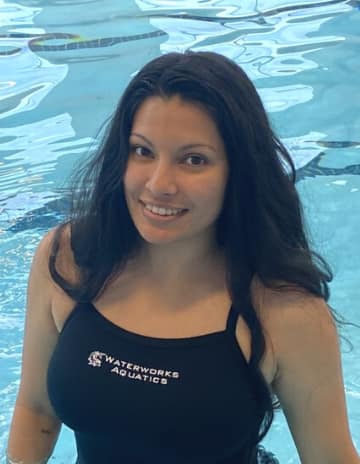 Rachel has been swimming since she can remember and swam competitively during her senior year of high school. Her favorite stroke to swim is the backstroke. Additionally, she played competitive softball for 8 years. She has experience working with kids as a babysitter.

In her free time, she enjoys riding bikes, hiking and doing arts & crafts. She has a passion for helping others meet their goals while being patient. Her favorite movie is Moana and she enjoys reading the Lord of the Rings books. She is excited to help her students learn a life-long skill. 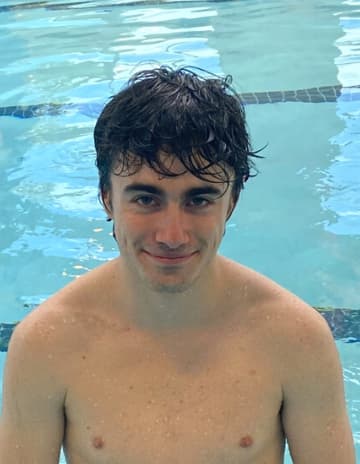 Raef has been playing several competitive sports since he was a child. In high school, he competed on the lacrosse team where he lettered for all 4 years. He has experience working with kids for 4 and a half years and helped take care of his younger siblings.

He goes to school at Metro State University where he is studying criminal justice. In his free time, he enjoys watching sports, eating pasta and being around his family and friends. His favorite movie is Cars and his favorite books to read are the Mazerunner series. He is excited to help his students become safer in and around the water.